Inflation was the hottest topic of 2022. The first signs of an inflation spike showed up in April / May of 2021. The causes were twofold: supply chain bottlenecks and significant monetary and fiscal stimulus. This spike saw the highest inflation rates in developed markets since the early 1980s. A big debate raged, was this transitory or was it here to stay? We wrote about this question in July last year (see HAS INFLATION PEAKED?). At that time we believed there were signs that inflation was peaking.

Since then, the signs have continued. Inflation is starting to roll over.

The annual rate remains elevated at 6.5%, however this is down from a peak of 8.5%. Furthermore, the annualised rate of the last six months is just 1.8%, below the Federal Open Market Committee (FOMC)’s 2% target.

The core CPI rate which strips out food and energy costs also eased, albeit at a slower rate from 6.0% to 5.7%.

The FOMC (after arguably being late) has been aggressively hiking interest in order to weaken demand and reduce inflationary pressures. Those rate increases, combined with easing bottlenecks, are now reversing the trend in inflation.

With CPI coming off, many market participants have started speculating that the FOMC may pivot and change tack with interest rates. There is little sign of that yet, and the reason behind that is that the economy seems to still be strong. The unemployment rate as shown below is at very low levels.

However, unemployment is very much a lagging indicator. Essentially, it is the last piece of the economic puzzle to break. So, we need to look at other indicators and for a large part of last year they were pointing to recession. This was a big driver of the market volatility last year. However, things have changed in the last few months and markets are suddenly feeling more positive. According to JP Morgan, 7 out of the 9 markets they look at are now indicating a less than 50% chance of recession. Markets are clearly starting to lean towards the FOMC being able to engineer a soft landing and bring down inflation without taking the economy into recession. At this stage, it is hard to tell either way. The recession that so many predicted last year hasn’t arrived yet, so have we avoided it or is it yet to come? There are two key sectors we need to look at with regards to a slowdown and depending on which one happens, they have very different economic outcomes.

To examine whether we might get a recession and what the effects may be, we need to look at some research done back in 2007 by an US economist called Edward E. Leemer. He published a paper entitled “Housing IS the business cycle”. In this paper he studied the causes of every US recession since World War 2, of which there had been 10.  What he discovered was that 8 out of the 10 were preceded by substantial problems in housing and consumer durables.” This led him to conclude that “Housing is the most important sector in our economic recessions, and any attempt to control the business cycle needs to focus especially on residential investment.” The only two US recessions that are exceptions to the above were the end of the Korean War in 1953, caused by a decline in defence spending, and the 2001 “Tech Wreck”. In writing this paper he also warned about the coming severity of the 2008 recession.

The key reason Leemer gives for housing being so important to the economy is that “house prices are very inflexible downward, and when demand softens as it has in 2005 and 2006, we get very little price adjustment but a huge volume drop. For GDP and for employment, it’s the volume that matters.”

In other words, a housing cycle will typically see a drop in transaction volumes and building activity that will lead to job losses and ultimately a downturn in the economy. The multiplier effect with the housing market is large with occupations ranging from developers, builders, agents right through to financiers impacted.

When we look at Residential Construction in the US, we see a worrying picture. Post-Covid, the industry has boomed. It has recently peaked and is starting to fall. This is something we need to keep an eye on.

As mentioned above, one of the exceptions to the rule with regards to recessions in the US was the 2001 “Tech Wreck”. In economic terms, this was a mild recession caused by an equity market crash. We recently noted the significant falls in some of the tech shares (see THE DEATH OF FAANG AND THE RETURN OF VALUE INVESTING), and now we are seeing job losses flow through in the sector. On the back of cost cutting, tech company share prices have generally reacted positively. However, there could be something darker at play. We have had a structural bull market in Technology for a long time, so much so that we have forgotten industries such as advertising (Google, Facebook) and Retail (Amazon, Apple) are cyclical.

Famed short seller Jim Chanos, under his Twitter profile “Diogenes”, notes the similarities between now and the latter stages of the “Tech Wreck”. 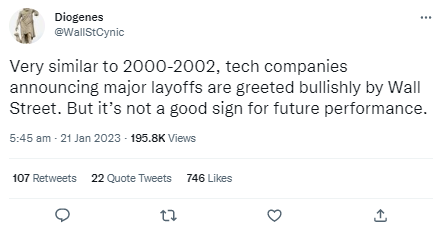 So, what does this all mean for markets? At the end of the day, the key driver will be earnings. As we noted back in November, valuations have started to matter for the first time in a long time. Higher interest rates forced down multiples. However, with expectations rising that the Fed will pivot, longer duration / higher valuation companies have started to rally and are the key reason why the S&P 500 is up over 5% to start the year. The investors buying those types of companies are potentially ignoring what it would take for the Fed to pivot. In our opinion, that would be a recession and that would not be positive for earnings.

Ultimately, investing is about the future and not the past. For now, investors should be focused on cashflows and resilience in earnings. What the next few years hold could be very different from the last decade.