A few months ago, we wrote an article questioning whether China was investable (see ‘Is China Investable?’). Our premise in that article was that intervention from the Chinese Communist Party (CCP) made investing difficult and unpredictable. We highlighted the examples in the Fintech space (Ant Group), in Technology (Didi Group), and the education sector to show what can happen. Now we are seeing the impact of a curb in leverage in the real estate sector. This is a story that has been building over the last year and is now focused on the second largest real estate developer in China, China Evergrande Group (Evergrande).

To understand why Evergrande is under pressure, we need to understand the cause. For years bulls and bears have debated the sustainability of the Chinese economic model. The bears have looked at the concentration of fixed asset investment (infrastructure and property) and the rise in debt and have decided that China is heading towards a financial crisis. The bulls have pointed to the central control and planning of the CCP. In this instance, it appears that both parties are partially right. The CCP started a year ago to crack down on leverage in the real estate sector in order to curb speculation and reduce the risk of a crisis. If the CCP is ever serious about “rebalancing” the economy, then a crackdown had to come given the concentration in real estate that can be seen below. It is important to remember that in the real estate sector it is construction and volume, and not prices, that matters for economic growth. Note that the countries that saw the biggest drop in construction in the early 2000s also saw the worst recessions (Ireland, Spain). The game for the developers in China has been to bid up land prices with debt. The price of land didn’t matter to them because they passed it through to the buyers of the eventual property. The risk sat with the buyers and the banks financing the property. Evergrande was at the centre of this having grown from its founding in 1996 to number 122 in the Fortune 500 in 2020. Its revenues grew to over US $100 billion and it was making c. US $5 billion in profit. However, at the same time its debt grew to over US $100 billion and its liabilities to over US $300 billion. It is this debt pile which is bringing it crashing down now. With two interest payments on bonds due later this month, there is real fear of a default.

People are now starting to draw similarities to 2008 and Lehmann Brothers. The difference at the moment is that the CCP is quite aware of the current risks and is attempting to stop the contagion and prevent a banking crisis. On that front, it is so far so good. However, this doesn’t mean there has been zero contagion, it is just showing up in different places.

The most obvious place it is showing up is in Chinese stocks and bonds. Firstly, we can look directly at Evergrande’s shares which have fallen 85% over the last year. 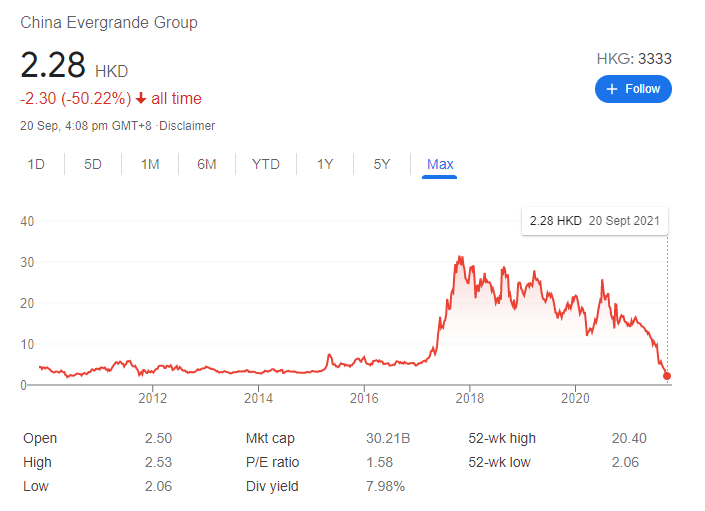 Other smaller developers have seen their share price hit, Sinic Holdings recently fell 87% one day. The Hang Seng Index where a lot of the developers are listed has fallen 4% over the last month and 16.5% over the last six months. A majority of other sectors have held up in the wake of this selloff, although it is worth noting that Ping An Insurance has fallen 48% off its recent high despite stating that they have no exposure to Evergrande. 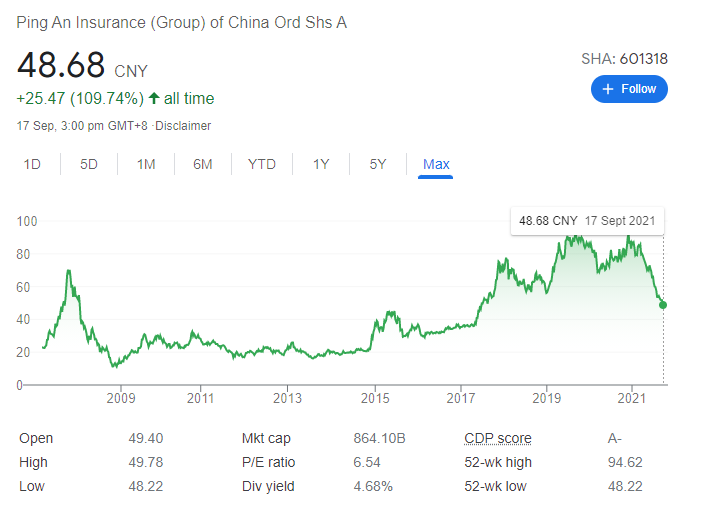 The Chinese debt market also tells an interesting story. The Bloomberg China HY USD index has fallen over 10%. However, it is worth noting this index is approximately two thirds real estate and the other top names in the index have held up well.

From the above we can see that the immediate concern is the Chinese real estate sector with some spill over to the banking sector. The CCP is carefully balancing this risk and is prepared to act, just this week it provided a liquidity injection for the banking sector.

Whilst the CCP is protecting the banking sector, there is a contagion starting through a fall in economic activity. As noted above, real estate construction is a huge driver of the Chinese economy. This shows up in the production of steel. Last year, China accounted for 57% of global steel production. Steel production has fallen for the last three months with August down 4.1% on July. The flow through from here is that China are the key customers for raw materials such as iron ore. As a result, iron ore prices have plunged. The Benchmark 62% ore price is down 58% for the quarter and 20% over the last week. The collapse in commodities is likely to somewhat alleviate recent inflation fears. Miners are also taking note of these. Australia’s Fortescue Metals, one of the most companies most levered to the iron ore price, has seen its share price fall 45% from its recent high. Countries such as Australia and Brazil will likely feel the impact as prices fall and production levels drop.

From the above, we can start to see the contagion slowly forming. This is not over yet and Evergrande will dominate the headlines for the foreseeable future. The CCP is set to try and balance the risks to the financial system to ensure this isn’t their Lehmann Brothers moment. Furthermore, the CCP will have to balance its reaction against executives at Evergrande, with the interests of retail investors who have bought wealth management products, which are now exposed to their debt pile. Stories are starting to emerge of insider selling in these products which are now largely frozen. Whatever the outcome, investors should be monitoring the situation. The contagion is widespread but sector specific currently, the next few months will let us know if it can be contained.