The remarkable aspect of government spending this year was that it more than replaced the drop in personal income we saw from the shut down. Households in aggregate were better off in the recession than before. People actually got paid more to stay home than to work. As these were unparalleled times, one could argue that the unparalleled response was justified. Households were bailed out for an event that was beyond their control. This had led some critics to highlight that the economy was only held together via government stimulus and in turn has created an artificial economy. However, a lot of people have been saying that about low interest rates and central banks since the GFC. We will touch more on this point later.

Whilst incomes rose, household spending fell and brought on the recession. When we look at the S&P500 earnings by sector we can see cyclical earnings are down significantly. On the other side, non-cyclicals have performed well with Healthcare and IT being the big winners. IT earnings, in particular, have been the big driver behind the market returning to all time highs. Lockdowns played right into the hands of the tech giants. More people were shopping via Amazon, more people were on Facebook and Instagram. This has led to the concentration at the top end of the market increasing with the largest 5 companies becoming a greater percentage of the market than ever before. 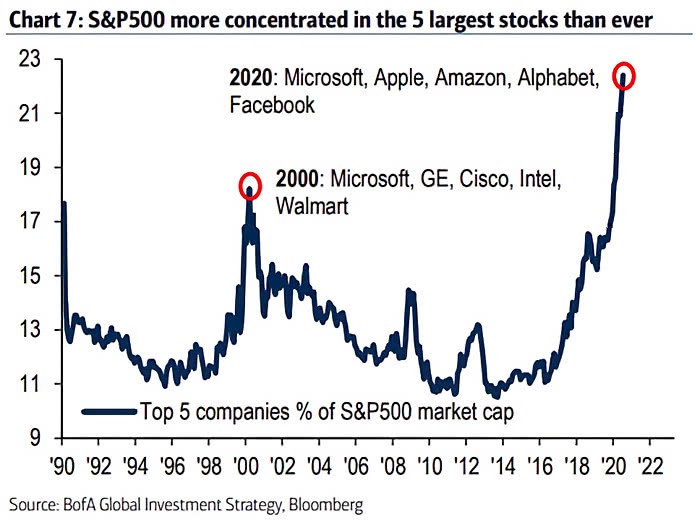 Growing earnings in the tech sector combined with lower interest rates have pushed valuation multiples up to areas that weren’t considered possible. This in turn has led to comparisons with 1999 and the “Tech Wreck”.

Of course, this brings us to the outlook for next year. For markets there are two questions, can the tech companies maintain their lofty valuations? And can cyclicals rebound? With regards to the first question, it is anyone’s guess but with interest rates remaining at or near zero it is hard to see a near term catalyst. For people attempting to short the market purely on a valuation basis, they need to be reminded of John Maynard Keynes’ famous quote, “the markets can remain irrational longer than you can remain solvent.”

With regards to the cyclicals, 2021 is shaping up as a potential turning point. A vaccine is on the way, interest rates are at zero and government spending is likely to remain elevated. A lot of people will ask how governments can afford this. To answer that we need to introduce you to Modern Monetary Theory (MMT), which has been one of the biggest talking points amongst economists this year. This follows the release of “The Deficit Myth: Modern Monetary Theory and the Birth of the People’s Economy” by Stephanie Kelton. MMT suggests that government spending is not restricted by government debt levels or its tax revenue. As a currency issuer, the government isn’t actually ever restricted by a lack of funds, they can always print more. In fact, the only restriction to government spending is inflation via overspending. Note this doesn’t work where a country has given up monetary sovereignty such as in the European Union.

As the world moves more towards MMT, we will see further government stimulus and combined with low interest rates and a vaccine there is a risk of economies overheating. In some areas it has already started: the CEO of homebuilder Toll Brothers recently commented that “We are currently experiencing the strongest housing market I have seen in my 30 years.” This came on the back of the single biggest quarter they have ever experienced.

Given the once bitten, twice shy nature of central banks and governments since the Global Financial Crisis they are likely to be hesitant to pull back on stimulus. The result is inflation might be on the horizon. Despite the best efforts of central banks, inflation has been dead for some time on the back of “Secular Stagnation”. Secular stagnation suggests that deleveraging, demographics, wealth transfer and technological advance are weighing on inflation and growth. If we remove any constraints with regards to government debt then we remove one of the challenges.

How central banks respond will be crucial. Will they start to signal higher rates if travel and life returns towards normal? As household debt levels are high globally, small increases in interest rates can have a significant impact. Unlike governments, households cannot print their own money. As a result a return to normal for the global economy could take a bumpy path if central banks get things wrong.

If you wish to request more information regarding this publication or enquire about an offshore structure please contact us today for an obligation free discussion regarding your options.

Disclaimer: The above contains the opinion of the author and is for information purposes only. It is not intended to be investment, tax, or legal advice.  Seek a duly licensed professional for this advice.